Asking patients “do you take any medications?” is not enough!!!—a case of spontaneous unilateral adrenal hemorrhage due to ingestion of OTC & herbal medications

A 57-year-old morbidly obese female presented to emergency room (ER) with complaints of left flank pain from past five days which was sudden in onset, gradually progressive with no exacerbating and relieving factors. Patient denied history of trauma, fall, and kidney stones. Of note, patient was also admitted in another facility about three days ago where she received treatment for her symptoms for about 24 hours and was discharged later on opioid analgesics.

Patient came to our ER when her pain was not controlled with prescribed pain medicines. On examination, she was in moderate distress due to pain with stable vitals except for mild tachycardia. Abdominopelvic exam was normal except for the left lower quadrant tenderness.

Because of her uncontrollable pain, a CT scan of abdomen & pelvis was performed which revealed enlarged left adrenal gland with increased attenuation and surrounding edematous and infiltrative changes suggestive of acute adrenal hemorrhage (Figure 1). Her laboratorial tests were normal except for PT/INR of 17.0/1.4 (normal range, 11.9–14.5/0.9–1.15). On further questioning, patient revealed that her mother had been giving her excessive amount of Ginseng, Ginko biloba, garlic extract, 3–4 pills of a multivitamin, fish oils, vitamin C and a baby aspirin daily to “keep her healthy”. Patient did not reveal this history in the previous medical facility too on initial questioning because she thought it was irrelevant. Patient was admitted in the hospital for observation of progression of hemorrhage. A repeat CT scan of abdomen next day showed stable hematoma. Patient was discharged after two days with advice to avoid strenuous activity and instructions to avoid using herbal medicines. A repeat MRI of adrenals after six weeks ruled out any local pathology. 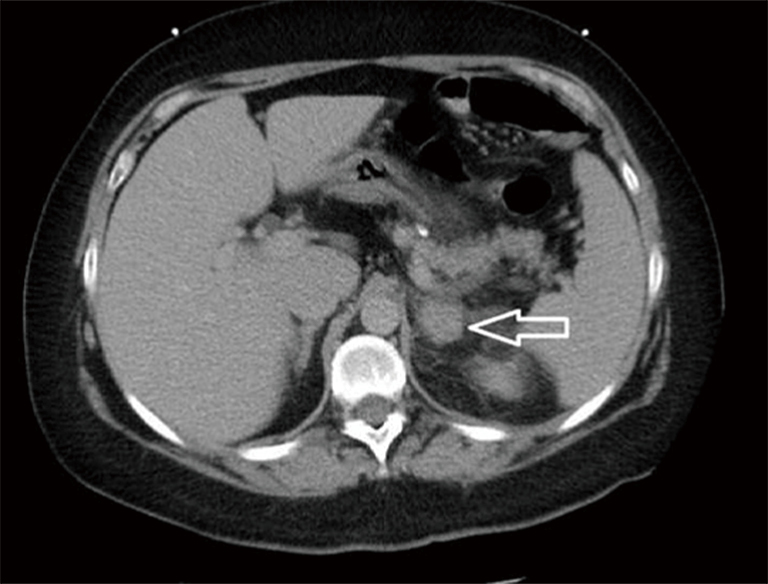 Spontaneous unilateral adrenal hemorrhage is very rare clinical entity (1), with only handful number of reported cases in literature (2) but no cases associated with herbal medications use. Herbal medicines have been gaining popularity in United States (perceived as “natural”) with about one in five adults (20% of population) taking an herbal product for medicinal purposes (3).

Our patients were on fish oils, Ginseng, Ginko biloba and garlic extract, all of which can alter hemostasis by variety of mechanisms including reducing platelet aggregation, inhibiting platelet activating factor and arachidonic acid metabolism (3,4). These herbs can have additive effect with other antiplatelet agents such as aspirin and their concomitant use with warfarin can potentiate its effect (4). This case calls for physicians to be extra vigilant about the use of herbal and over-the- counter medications in all the patients (5). An additional question, “Do you take any herbal or over-the-counter medications?” during patients’ medications history could avoid such nearly missed diagnoses.