The significant characteristics of corticobasal syndrome

According to the Diagnostic and Statistical Manual of Mental Disorders, Fifth Edition (DSM V), dementia is a neurocognitive disorder of the elderly, with various degrees of severity (1). Dementia is caused by a variety of diseases and injuries that primarily or secondarily affect the brain. It is characterized by multiple progressive cognitive deficits resulting in a decline from the previous level of mental function (2). Although the probability of developing dementia rises with age, however, dementia is related to abnormal aging (2,3). The aim of this study was to described symptoms and signs of the CBS and its confirmation with mutation analysis of the related genes.

CBS is a rare neurodegenerative disorder, which commonly presents with an asymmetrical progressive loss of motor function, which can include apraxia, rigidity, dystonia, and in some cases, alien limb syndrome. CBS was first described by Rebeiz et al. in 1967 (4,5) and termed eventually corticobasal degeneration (CBD). Even though it was considered as a distinct clinicopathologic entity (2,3) clinicopathological studies have revealed that CBD is associated with various clinical syndromes one of which is the CBS, a phenotype of CBD (6,7).

CBS is presumed to be underdiagnosed and the incidence and prevalence of CBS are remaining unknown. The typical onset of the syndrome is between ages 50 and 70 with the most patients do not have a family history of CBS.

CBS is associated with a variety of underlying pathologies with CBD pathology represent 50%. More specifically, a wide spectrum of diseases has been associated with CBS, including several proteinopathies such as amyloidopathies, tauopathies, TDP-opathies, synucleinopathies and prionopathies (8-15). The most common associations refer to CBD, are progressive supranuclear palsy (PSP) and Alzheimer’s Disease (AD) pathology. Frontotemporal lobar degeneration with ubiquitin- and TDP-43-positive inclusions (FTLD-TDP), Pick’s disease (Pick), Lewy body disease (LBD), frontotemporal lobar degeneration with fused in sarcoma-positive inclusions (FTLD-FUS) and Creutzfeldt-Jakob disease (CJD) have also linked with CBS (8-15). Biochemical features could only be available after an autopsy as the diagnosis of the underlying cause of CBS is possibly only through postmortem brain analysis. The results of postmortem brain analyses have shown that the majority of causes in CBS are tauopathies. Tau protein exists in six isoforms and different neurodegenerative diseases that can cause CBS, have been associated with specific tau isoforms. CBD and PSP feature predominant disposition of 4R-tau while AD is presented with 3R and 4R-tau protein isoforms, and Pick’s disease with 3R-tau (8-15).

Microscopic findings could also help to differentiate pathologic causes of CBS. Both CBD and PSP presented with threads in gray and white matter but in CBD the boundary between the two of them may be unclear due to the concentration of threads. Astrocytic plaques are the most distinguishing histopathological features between CBD and PSP concerning glia lesions. In PSP the characteristic glia lesions are tufted astrocytes while in CBD astrocytic plaques represent tau accumulation in the distal segments of astrocytes creating a central clear zone. Ballooned neurons are also highly indicative of CBD pathology with swollen cortical neurons often found in third, fifth and sixth layers of Cingulate gyrus, amygdala and insular cortex. Furthermore, oligodendroglial tau inclusions, called coiled bodies, are very frequent in PSP instead of CBD (8-15).

Over the last years, there have been numerous advances in descriptions of genetic causes of CBS. However, the genetics of CBS cases is mainly unknown and sporadic. Mutation in the microtubule associated protein tau (MAPT) has been presented in patients with CBS. Also, mutation in the gene that encodes progranulin (PGRN) is frequently observed in CBS patients. In addition, a pathogenetic C9orf72 repeat expansion has associated with CBS, especially in patients with FTD or amyotrophic lateral sclerosis (ALS). With regard to the above-mentioned, patients with MAPT mutations presented with FTLD-tau pathology, while patients with PGRN and C9orf72 mutations with FTLD-TDP pathology. The VCP (valosin-containing protein), CHMP2B (encodes charged multivesicular body protein 2b), TARDBP (TAR DNA-binding protein 43) and FUS (encodes RNA-binding protein FUS) mutations are also associated with FTLD pathology but account for <3% of familial FTLD cases (16). In patients with familial and sporadic FTLD, the microtubule associated protein tau (MAPT), progranulin (PGRN) and C9orf72 mutations presented as the three most common causes of the CBS (17,18).

Relating to motor presentation, levodopa-unresponsive parkinsonism, asymmetric akinesia and rigidity as well as corticobasal deficits such as dystonia, myoclonus, limb apraxia and alien limb phenomenon are the core features of CBS (20,21). In particular, patients with CBS characterized by an absence or abnormally slow movement (akinesia/bradykinesia), stiffness or resistance to movement (rigidity) and a sustained or a repetitive muscle contractions resulting in twisting movements or abnormal postures (dystonia). In absence of impaired muscle control, affected voluntary positioning and sequencing of muscle movements are also associated with CBS (Table 1).

From a cognitive perspective, CBS is also characterized (27,29) by distinguishing deficits in language, visuospatial dysfunction, and social cognition (3). Several CBS patients faced obvious speech and language problems in the early stage of the syndrome. In particular, patients presented with agraphia (4,23,28), difficulties in spontaneous speech and both single-word and sentence repetition impaired (30). As the syndrome progresses the language dysfunction may be aggravated (27,30,31). Also, most patients demonstrate impaired visuospatial function and it is possible to develop Balint’s syndrome (30,32,33). Inability to express and recognize emotions is observed in patients with CBS and positively correlated with changes in behavior and personality, similar to those observed in FTD (27,30,34). Executive function and memory deficits may also be present in patients with CBS but these deficits are not specific and pathognomonic for CBS in relation with other neurodegenerative diseases, such as frontotemporal dementia, PSP, or AD (3) (Table 2). 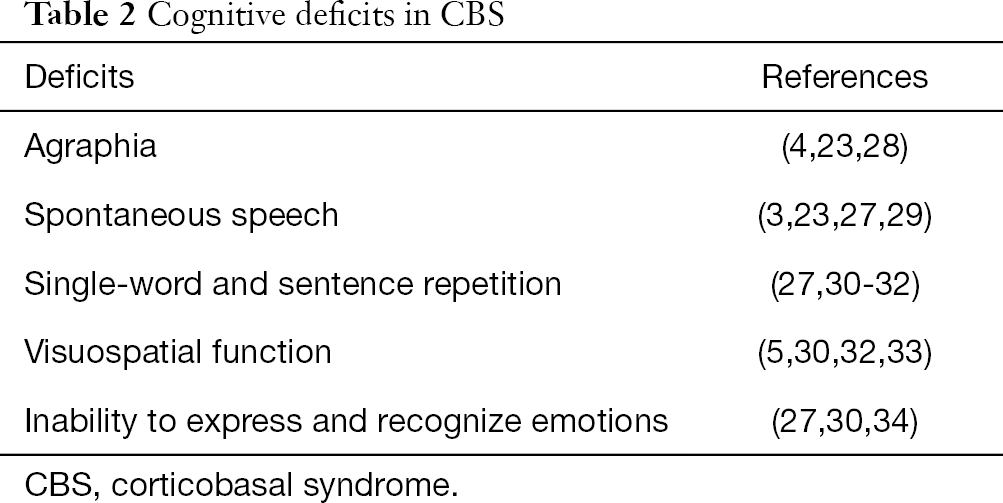 Recent advances in neuroimaging have shed light on specific structural neuroanatomical changes that occur as a result of CBS, even though the pathophysiology of CBS is largely unidentified. Neuroimaging studies with voxel-based morphometry (VBM) have consistently demonstrated atrophy of the gray matter (GM) loss in frontoparietal regions. In particular, primary motor cortex, inferior parietal, left supplementary motor area (24,35-39), and subcortical structures, including the basal ganglia, were presented significantly impaired in CBS patients (3,36,39-42). A more frontal involvement may indicate CBD and TDP-43 pathologies while a more widespread atrophy including post-temporal and parietal areas AD pathology (24,35-39). Furthermore, glucose hypometabolism in the frontal, temporal and parietal lobes, as well as the basal ganglia have been observed in patients with CBS, especially contralateral to the impaired side (22,25,26,43,44) (Table 3).

CBS treatment includes pharmacologic treatment for motor, cognitive and behavior symptoms of CBS and is symptomatic. The parkinsonism symptoms CBS are treated typically with levodopa, with a slight response. Other treatments such as other dopaminergic therapies, benzodiazepines and anticholinergics have no effect and may be associated with worsened cognition (13,21,45,46). Targeted botulinum toxin injections are used to manage dystonia symptoms (45,47-49). Benzodiazepines, anticholinergic agents, or muscle relaxants are also tried but these are usually ineffective (44,45). Instead, therapeutic strategies for myoclonus include benzodiazepines, particularly clonazepam which is typically the most responsive (22,45,50). Levetiracetam may also be beneficial (18,51). Use of other agents such as gabapentin and valproic acid is also described (50). Cognitive symptoms of CBS are treated with Acetylcholinesterase inhibitors (AChEIs) including rivastigmine, donepezil, galantamine and memantine. However, even though pharmacologic treatment with AChEIs has biological plausibility it remains unidentified and relates to the underlying pathology of CBS (52-58). Patients with CBS have also experienced depression, anxiety and obsessive-compulsive features which can be treated with selective serotonin reuptake inhibitors (SSRIs) (50). Problematic and inappropriate behaviors are treated with atypical neuroleptics or mood-stabilizing agents (50). Apathy is treated with psychostimulants and AChEIs (50), however, the results are controversial (59). Also, cognitive behavior therapies, occupational therapy and kinesiotherapy are addressed in CBS patients in order to improve speech, language and motor symptoms.

In the present study, we underline the associated with CBS symptoms and signs in relation to the main mutations which confirm the clinical diagnosis of CBS. The clinical and mutation analysis of the disorder could be the most interesting factor which could mirror the gene therapeutic procedure of the disorder. Differential diagnosis of this disorder could be greatly helped by identification of specific biomarkers in CSF, in relation to mutation analysis of the gene. It may be concluded that clinical symptoms and signs of the suspected patients could be confirmed with mutation analysis.

The authors would like to thank the reviewers and editor for the helpful comments on the previous draft.