Peptic ulcers are pathological gastrointestinal lesions that occur in the stomach and duodenum as a result of imbalance between the defensive gastric mucosa and aggressive factors such as gastric acids and pepsin, free radicals, leukotrienes, ethanol, Helicobacter pylori infection, nonsteroidal anti-inflammatory drugs (NSAIDs) etc. (1-3). Gastric ulcer is characterized by inflammation, hemorrhagic erosions, necrosis, infiltration of neutrophils, reduction of blood flow, reactive oxygen species (ROS) and oxidative stress (4,5). A major source of ROS in ethanol-induced gastric mucosal damage is the infiltration of neutrophils (2). Neutrophils adhere to the vascular endothelium and subsequently release oxygen-derived free radicals and proteolytic enzymes that are implicated in the pathogenesis of various forms of gastrointestinal ulceration including gastric mucosal damage associated with oral ethanol consumption or administration (6-8). Hydrogen receptor antagonist, proton pump inhibitors, antacids, histamine receptor antagonist are the commonly used antiulcer drugs (9,10). However, most of these drugs result in undesirable adverse side effects; hypergastrinemia and high rate of ulcer recurrence due to long term use (11-14). Therefore, there is a need for a natural and readily available antiulcer drug with little or no side effect. Phoenix dactylifera (P. dactylifera), commonly known as date palm, is a flowering plant species in the family Arecaceae, cultivated for its edible sweet fruit; the plant is widely cultivated and distributed in many tropical and subtropical regions worldwide (15). Studies have shown that date extract enhances antioxidant processes and prevent oxidative stress the antioxidant potential was attributed to the wide range of phenolic compounds, flavonoids, tannins and saponins and vitamin C (16,17). Date palm fruit extracts were reported to exhibit gastrointestinal protection against different ulcer inducing agents (18,19). It also possesses antioxidant, hepatoprotective, anti-ulcerative, anti-inflammatory, anti-proliferative, anti-mutagenic, antibacterial, antifungal and antiviral potentials (20,21). P. dactylifera extracts was proven to exhibit antagonist effects to oxidative stress induced by opioid (22). The aim of the present study was to evaluate the protective role of P. dactylifera extract against ethanol-induced gastric mucosal damage by evaluating the antioxidant defensive mechanism along with morphological and histopathological changes.

P. dactylifera fruits were purchased from a local salesman in Maiduguri central market and were authenticated by a botanist in University of Maiduguri. The fruit were separated from the pit, washed, air dried and grounded with mortar and pestle. Twenty grams of the powdered fruit was soaked in 1,000 mL of distilled water for 24 hours, filtered with a filter paper and allowed to settle down, it was decanted and oven dried at 50 °C.

The rats were randomly divided into four groups and fasted for 18 hours. Rats in groups 1 and 2 were pretreated with 1 mL normal saline and gestid suspension (Ranbaxy Pharmaceuticals Inc., Princeton, NJ, USA) respectively while those in groups 3 and 4 were pretreated with aqueous extract of P. dactylifera fruit at 250 and 500 mg/kg respectively 30 minutes before administration of 1 mL of 80% ethanol. The LD 50 of P. dactylifera fruit was reported to be greater than 3,000 mg/kg (23) 17% of the LD 50 was chosen as the high dose. All the rats were sacrificed after 1 hour by ketamine injection and the stomachs were dissected out and cut opened, the stomach content were deposited in a beaker and 3–5 drops of pH meter was added to determine the pH. The stomachs were washed and examined using a hand lens for macroscopic lesions in the glandular part. The severity of macroscopic lesions formed were estimated using an ulcer index (UI) as reported by (24) using the following scale: 0 for normal mucosa; 1 for vascular congestions; 2 for one or two lesions; 3 for severe lesions; 4 for very severe lesions and 5 for mucosa full of lesions. The total and ulcerated area of each stomach was measured and ulcer indices (UIs), ulcer inhibition rates (UIRs) and total stomach area (TSA) were calculated using the formulae; UI = UA/TSA ×100 (24,25), UIR (%) = UI (control–pretreated)/UI control ×100. TSA = πr2 where, UA = ulcerated area, π =3.14 and r = diameter of stomach/2 (25,26).

The stomach of each rat was fixed in 10% formalin, and processed for light microscopic study; they were sectioned at 5 µm and stained with hematoxylin and eosin (H & E) (27).

One way analysis of variance (ANOVA) was used to compare the differences between the groups using Instat statistics 3.1 (Graphpad Software, San Diego, CA, USA). All the data were expressed as mean ± SEM and a P value less than 0.05 was considered as the significant level. 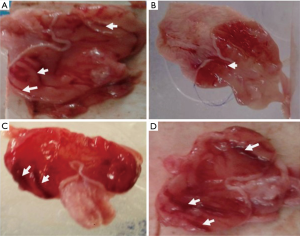 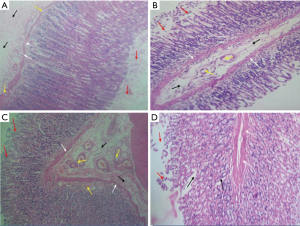 The significant decrease in the UI of rats pre-treated with P. dactylifera extract at 250 and 500 mg/kg showed that the extract can protect the stomach mucosa from damage due to ethanol consumption, even though gestid suspension offers better protection as having lower UI as compared with that of P. dactylifera extract. P. dactylifera extract is most effective at 250 mg/kg and because it is a natural product with many medicinal properties (30), it is likely to present little or no side effects.

The extract of P. dactylifera at 250 mg/kg was shown to reduce gastric mucosal epithelial damage, distortion of submucosal layer and maintaining endothelial cell integrity, this might be due to the fact that P. dactylifera extract contains phenolic compounds and has antioxidant property (30) but at a higher dose of 500 mg/kg, the resulted mucosal damage might be due to the presence of saponin in the extract that was proven to create pores and exert a lytic action on some cell membranes leading to cell damage (31,32).

Ethical Statement: The research was conducted in accordance with the University of Maiduguri Research and Ethical Committee guide for the care and use of laboratory animals, the ARRIVE guidelines by the National Center for the Replacement Refinement and Reduction of Animals in Research and the provisions in accordance with the Helsinki Declaration as revised in 2013.