Community-acquired pneumonia (CAP) is a common disease, and among infectious diseases it is the major cause of death (1,2). CAP may cause local and systemic inflammation, whether or not invasive disease is present (3,4). The systemic compromise is the consequence of a dysregulated host response and may lead to organ dysfunctions such as renal failure, neurologic compromise, and septic shock, and eventually to death (5).

Prompt, rapid diagnosis is essential in order to provide effective treatment and to improve outcomes. Recently, the definition of sepsis has changed, generating a great deal of discussion on the best methods for recognizing the condition and for assessing the risk of death (6).

In 1991, sepsis was defined as a systemic response to infection (7). The concept was termed systemic inflammatory response syndrome (SIRS) and was defined as the presence of more than one of the following clinical manifestations: (I) body temperature above 38 °C or below 36 °C; (II) heart rate above 90 beats per minute; (III) tachypnea, manifested by a respiratory rate above 20 breaths per minute, or hyperventilation, indicated by a PaCO2 below 32 mmHg; and (IV) an alteration in the white blood cell count, i.e., above 12,000/cu mm or below 4,000/cu mm, or the presence of more than 10% immature neutrophils (“bands”). These parameters are the expression of physiologic changes caused by infection; SIRS frequently leads to organ dysfunction, though not in all cases.

In 2001 a committee (Sepsis 2) (8) revised the definition, but maintained the concept of SIRS. A list of non-specific signs that might be present in sepsis and in early organ dysfunction was added to help identify septic patients. The committee also added the concept of PIRO, the acronym of a system for staging sepsis which takes account the Predisposition (underlying factors such as premorbid illness, age or factors that reduced short-term survival), insult infection (pathogens and specific toxins such as LPS), response (systemic inflammatory response) and organ dysfunction (number of failing organs).

In 2004 (9), a campaign called Surviving Sepsis was launched, designed to reduce sepsis-related mortality by improving early and effective management of septic patients. Several updates have since been published (10-12).

In 2016, a new committee (Sepsis 3) revised the concept of sepsis after some studies had shown that SIRS did not accurately predict poor outcomes (13,14). This committee introduced a profound change in the concept of sepsis (Figure 1), defining it as life-threatening organ dysfunction caused by a dysregulated host response to infection. The concept of SIRS was eliminated, and for practical management, sepsis is defined by an increase in the Sequential (Sepsis-related) Organ Failure Assessment (SOFA) (15) score of two points or more, associated with an in-hospital mortality above 10%. In addition, for prompt, rapid identification in the emergency department or general ward, a new bedside clinical score was developed called Quick SOFA (qSOFA), which includes a respiratory rate of 22/min or greater, altered mentation, or systolic blood pressure of 100 mmHg or less. A score of two points or more indicates a high risk of poor outcome.

Prevalence of sepsis in CAP according to different definitions

CAP is the most common cause of sepsis in many of the series reported (16,17). Between 40–50% of patients with sepsis present respiratory sources of infection. CAP is also the leading cause of death among infectious diseases, and so these patients should be extensively evaluated for early recognition of poor outcomes.

Several studies carried out since Sepsis-3 have evaluated the best approach for early recognition of patients with sepsis and have validated the concept of qSOFA. Some of these studies were performed in patients with CAP.

SIRS has shown high sensitivity but low specificity, while qSOFA has shown low sensitivity (20). As noted by Williams and colleagues (21), this observation has limited the use of qSOFA. Interestingly, the presence of SIRS increases the risk of death, even in patients without organ dysfunction.

SOFA has proved to be a better predictive model than other scores when comparing patients admitted to ICU (22). However, it is difficult to calculate and so its use may delay early recognition.

The study by Ranzani and colleagues (18), conducted in two cohorts of patients with CAP from Hospital Clinic in Barcelona and Hospital La Fe in Valencia, reported that 442 of 6,874 patients (6.4%) died in hospital. SIRS presented the worst discrimination (AUROC 0.579, 95% CI, 0.551–0.605), followed by qSOFA (AUROC 0.697, 95% CI, 0.671–0.722), CRB (AUROC 0.716, 95% CI, 0.690–0.741) and SOFA (AUROC 0.748, 95% CI, 0.721–0.774). Calibration plots were comparable among the scores, although overestimation was more pronounced for qSOFA and SOFA scores. Using the cut-off of two points, the sensitivity/specificity was 88/22% for SIRS, 50/82% for qSOFA, 39/87% for CRB and 97/23% for SOFA. The net benefit of the SIRS strategy was similar to that of the treat-all strategy, and was higher for SOFA and qSOFA. Interestingly, in this study the score proposed for management of CAP outperformed qSOFA and SOFA, CRB-65 was better than qSOFA as a bedside clinical score, and PSI was better than SOFA for predicting mortality. Chen and colleagues (26) evaluated the performance of qSOFA and compared it with CRB-65 in patients with pneumonia; both scores include neurologic status, respiratory rates and blood pressure, although they used different cut-off points. CRB-65 also included age, a known risk factor for mortality in pneumonia. The authors observed that qSOFA was better than CRB-65 for predicting mortality, even though one limitation of this study is the high mortality observed.

In view of these results, the assessment of risk in patients with CAP we propose that the scores developed for this condition, mainly CURB-65 (27) and PSI (28), and ATS/IDSA criteria (29) should continue to be used for site of care determinations. These scores have been extensively validated in CAP, include variables that are readily available, and are commonly used for CAP management (30).

Biomarkers in sepsis and CAP

Several markers can be used for diagnosis or prognosis in patients with sepsis and CAP.

C-reactive protein (CRP) is an acute phase reactant protein. Its levels increase during inflammation, and bacterial infections produce a rapid rise (4,31,32). Changes in the levels of CRP can be used to diagnose sepsis; however, they may be more useful for monitoring patient response (33). A fall in CRP levels indicates a good response to treatment. CRP may also be used to indicate adjunctive treatments, as discussed below (34).

Procalcitonin (PCT) is a marker of inflammation, and increases particularly in systemic bacterial infections (35). High levels of PCT indicate a high likelihood of systemic infection (36). PCT is also useful for guiding antibiotic prescription in lower airway respiratory infection and for supporting decisions to discontinue antibiotic therapy (37).

Lactate is a marker of tissue hypoperfusion, and is used as a marker of severe sepsis and septic shock. High lactate levels are associated with increased risk of organ failure and mortality (38). Levels above 4 mmol/L in the context of sepsis are considered as septic shock (39). Lactate levels can be used as a dynamic marker for fluid resuscitation and requirement of vasopressor therapy. Lactate should be used carefully in patients with renal and hepatic failure, given that its clearance depends on the kidney and the liver.

MR-proAdrenomedullin (MR-proADM) is the most stable fragment of the adrenomedullin precursor, and is used as a marker of sepsis. It has mainly been evaluated in CAP. Its prognostic value at admission is comparable with that of clinical scores such as PSI and CURB-65, and is independent of the etiology of CAP (40). It is also a marker for fluid sequestration, endothelial damage and heart failure, and can therefore be used dynamically during fluid resuscitation (41,42).

Influence of sepsis on outcomes of CAP

Patients may present organ dysfunction at admission, or develop it during hospitalization. Several studies showed that patients admitted to ICU after first passing through the general ward have worse outcomes and higher mortality (51 to 23% vs. 23 to 12%) (50-52). Many of these patients might benefit from early and intensive treatment.

Management of patients with sepsis and CAP

Early recognition and diagnosis allows prompt initiation of therapy (12). Sepsis and septic shock are medical emergencies and should be treated immediately. Resuscitation from sepsis hypoperfusion should be started with 30 ml/kg of IV crystalloid fluid within three hours (53-56). Hemodynamic assessment including cardiac functions should be performed dynamically, and additional fluid use should be guided by frequent reassessment of hemodynamic status, with the goal of maintaining a mean blood pressure above 65 mmHg. Lactate levels can also be used to evaluate sepsis-related hypoperfusion. Rivers’s protocol (57), also known as early goal-directed therapy, has been proposed for the management of sepsis primarily due to its good results in the trial. This protocol included a central venous pressure higher than 8 cmH2O, maintenance of mean blood pressure above 65 mmHg, and central venous oxygenation saturation higher than 70%. Despite the good results obtained by Rivers and cols, these results could not be reproduced in three subsequent RCTz (53-56). If hemodynamic stability is not achieved with fluid resuscitation, vasopressor therapy should be initiated. Norepinephrine is the first-choice vasopressor; vasopressin or epinephrine may be added, and dopamine is an alternative to norepinephrine. Dobutamine should be added in patients who show evidence of persistent hypoperfusion despite adequate fluid loading and the use of vasopressor agents.

Respiratory support should be added if necessary. Oxygen support via mask, high flow nasal cannula or mechanical ventilation is recommended.

Before starting antimicrobial treatments, microbiologic cultures should be performed, although these cultures must not delay the initiation of antimicrobial therapy. At least two sets of blood cultures, including aerobic and anaerobic cultures and when possible respiratory secretions, should be obtained. Isolation of the causal germ allows appropriate antibiotic de-escalation in a carefully managed antibiotic stewardship program (12,29). New molecular techniques will also allow rapid identification of the germ and resistance patterns (58); however, more validation studies are required.

Intravenous antibiotics should be administered as soon as possible, within an hour of recognition of sepsis. Any delay in their administration increases the risk of mortality, length of stay, complication rate and SOFA score (59,60).

Empirical antibiotic treatment should cover the main pathogens that cause pneumonia, including Streptococcus pneumoniae, atypical bacteria and Gram-negative bacilli. Guidelines suggest the use of a β-lactam plus a macrolide, β-lactam plus a fluoroquinolone or a fluoroquinolone alone as empirical treatment (29,61). In a Spanish multicenter study of more than 4,000 patients, adherence to guidelines and early antibiotic administration were protective factors against 30-day mortality in patients with sepsis and CAP (62). Interestingly, Amaro and colleagues (63) showed that patients who received antibiotics prior to hospital admission were less likely to present septic shock or require mechanical ventilation.

Macrolide combinations showed better outcomes in retrospective and observational studies than monotherapy with a β-lactam, especially in critically ill patients (64-67). Macrolides also have an immunomodulatory effect in addition to an antimicrobial effect.

In patients with severe CAP and high inflammatory response, corticosteroids may be added if the patient does not present contraindication or Influenza pneumonia. Corticosteroid use reduced treatment failure, a composite outcome that included early treatment failure (development of shock, need for invasive mechanical ventilation and death in the first 72 hours), and late treatment failure (persistence of respiratory failure, radiographic progression, shock, and need for mechanical ventilation or death among 72 to 120 hours after admission) (34). Corticosteroids have also shown reduced time to clinical stability and length of stay in several RCTs and reduced mortality in patients with severe CAP in meta-analyses, though some of the RCTs included had a high risk of bias (68). 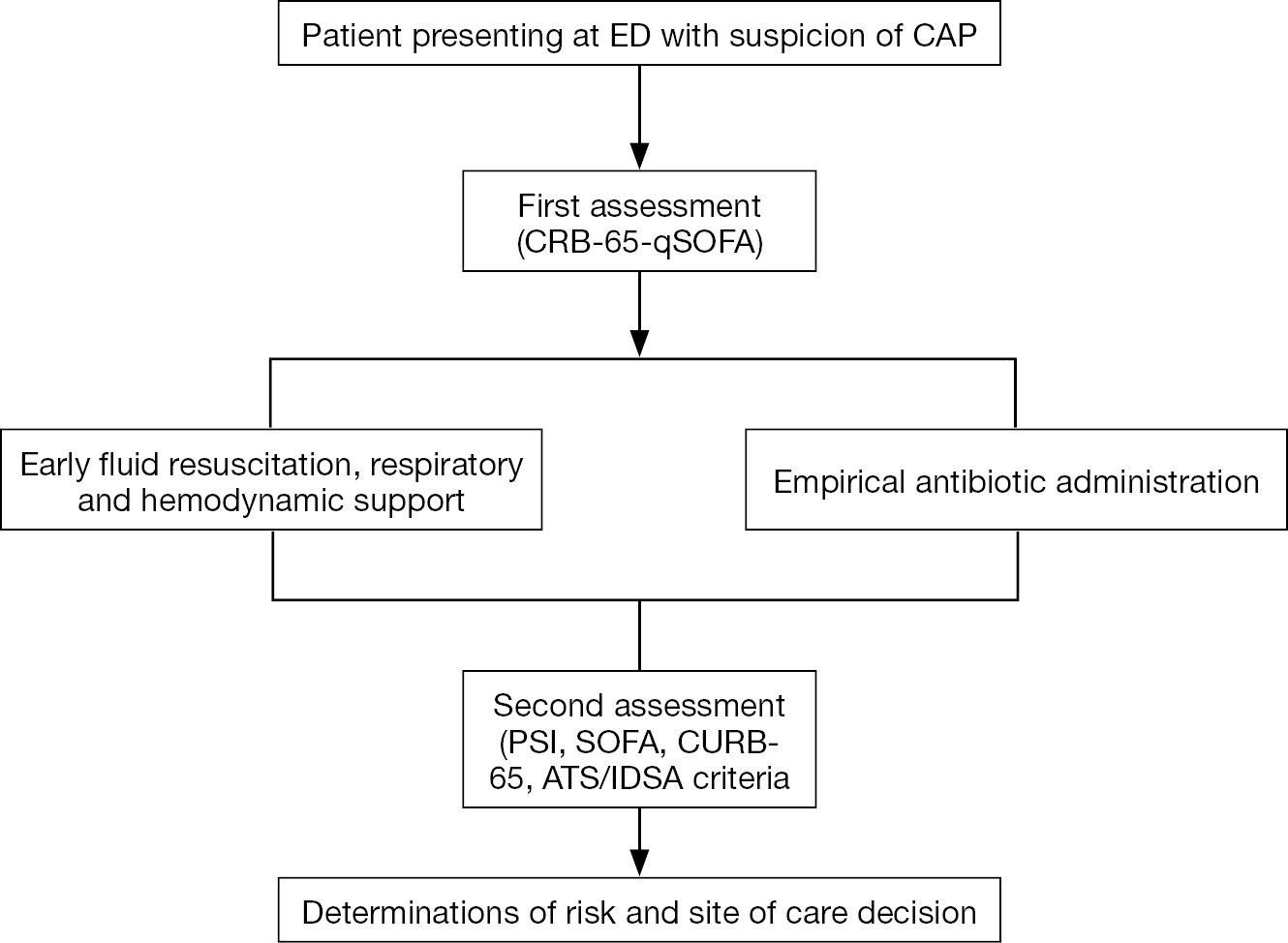 Patients presenting with CAP and sepsis must be identified quickly and treated with effective antibiotic treatment within the first hour of ER admission. There is some controversy about the scores for risk assessment; however, CAP scores such as PSI and CURB-65 have been extensively validated and are suitable for use.