Physical exercise has a major impact on male physiology affecting significant hormonal axes, such as the hypothalamic-pituitary-testicular (HPT) and -adrenal (HPA) axes (1,2). Testicular and adrenal androgens, namely testosterone and dehydroepiandrosterone (DHEA), have anabolic effects on the skeletal muscles mainly by increasing protein synthesis. This in turn results in muscle growth, and the development of physical fitness (3,4). On the other hand, cortisol, the final product of the HPA axis, is released during the stress of exercise to facilitate adaptive responses, so that the organism can find a new dynamic equilibrium to maintain homeostasis (1,5). To facilitate this energy demanding process cortisol also stimulates the breakdown of stored energy; carbohydrates, fat and protein and promotes gluconeogenesis, storing glucose in an easily accessible form (6,7). The impact of exercise however in these hormones varies and depends on the intensity and duration of the activity (8). Thus, although short-term exercise can increase testosterone levels (9), strenuous exercise suppresses testosterone concentrations by complex mechanisms that affect the entire HPT axis (10). Indeed, in endurance-trained men, especially runners, a reduction in circulating levels of total and free testosterone and alterations in the release of luteinizing hormone (LH) have been repeatedly measured (11,12). The HPA axis is also differently affected by the acute or chronic stress of exercise (2). Short-term intensive and moderately prolonged exercise leads to elevation in cortisol levels, as a result of the acute stress and the higher demand of energy (13). Research findings on long-term exercise however, have been contradictory. There are studies that show that sustained chronic stress or physical uninterrupted daily training leads to elevated cortisol levels (12,13) but there are also studies that show a decrease in cortisol levels after long-term endurance training or competition (14). DHEA(S) the precursor of the more potent sex hormones, testosterone and estrogens, is also stimulated by stress (15). IGF-1 also mediates some of the beneficial effects of exercise, especially associated with the re-modelling mechanisms of muscles during the post-exercise recovery (16,17). It is secreted by the liver into the circulation, but it is also synthesised and secreted locally in tissues and cells such as the satellite cells and myoblasts in skeletal muscle (16,18). IGF-1 has both anabolic effects, such as the stimulation of cell cycle initiation and progression and satellite cell activation, proliferation, survival, and differentiation (18), and metabolic effects, such as triggering of protein synthesis, free fatty acid use, and insulin sensitivity enhancement (19,20). On the other hand, the effects of exercise on IGF-1 have also been variable depending on the type and duration of exercise (21-23). Because of their anabolic effects both androgens and growth hormone have been used by athletes to enhance their athletic performance. The aim of this study was to assess the changes of the HPT and HPA axes and IGF-1 levels in athletes participating in the super-marathon Spartathlon.

“Spartathlon” is an official international supermarathon held annually at the end of September in Greece. This athletic event based on the historical run of Philippides, an Athenian, who in 490 BC covered 246 kilometers (approximately 5 marathons), in a day and a half, from Athens to Sparta, to enlist the Spartans’ help against the Persians. This supermarathon is a type of continuous with moderate intensity exercise of 246 km distance, during which runners attempt to cover the same distance from Athens to Sparta. Our study performed the “Spartathlon 2016”. The study protocol was approved from the Bioethics Committee of the Harokopio University, Laboratory of Nutrition and Clinical Dietetics. All experimental procedures conformed to the National Health and Medical Research Council guidelines for experimentation with human subjects. The ambient daily temperatures ranged from 32–36 °C in planes and 8–10 °C in highlands with mean daytime relative humidity was 60–85%. All potential participants (n=85) were informed of the purpose and procedures of the study and gave an informed written consent prior to participation in the study. The data of this study were derived from 16 healthy male subjects who participated to the Spartathlon race 2016 (median age 40 years, range 31–46 years) and finished the race in less than 36 h [mean, median running times were 32:08, 30.02 (h:min), range 25:17–34:43]. The athletes’ body mass index 21.2±1.8 kg/m2 was calculated at Phase I.

Sampling and analysis of blood

Blood samples were collected from the participants prior to race start, immediately after (within 15 minutes) the end of the event, while the final sample was obtained at the recovery period; at 48 h post-race. The subjects consumed electrolytes and carbohydrates ad libitum before, during and after running. The samples were stored frozen at −80 °C until assayed.

All subjects were tested at same time of the day at three phases: before the race (Phase I), at the end (Phase II) of the race and 48 hours postrace (Phase III). Blood samples were assayed for testosterone, DHEAS, LH, FSH, cortisol and IGF-1. All immunoassays were performed with an electrochemiluminescense technique using the Roche Cobas e 411 immunoassay analyzer (Roche Diagnostics Mannheim, Germany).

Data are presented as mean ± SEM, and the level of statistical significance was considered at P<0.05. Descriptive statistics and ANOVA repeated measures models were applied in order to determine the differences between time points of the “Spartathlon” athletic event. All the statistical procedures were performed using the STATGRAFICS PLUS version 5.1 for Windows program (Graphic Software System). 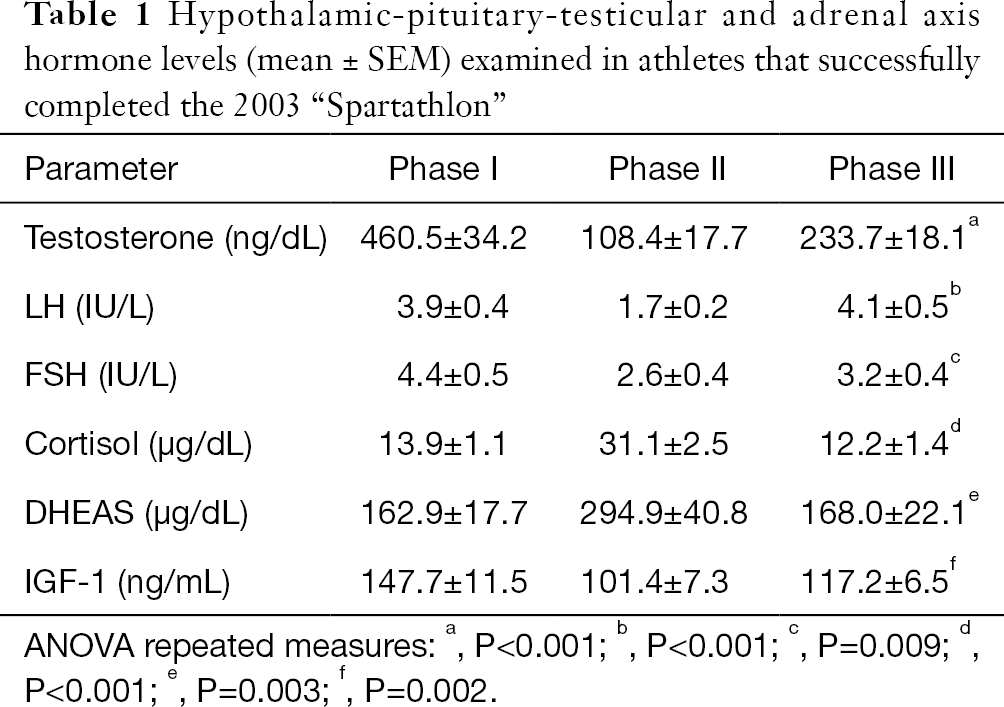 The circulating levels of the HPA axis hormones cortisol and DHEAS increased significantly at the Phase III. Specifically, cortisol concentration was 13.9±1.1 µg/dL at Phase I and 31.1±2.5 µg/dL at Phase II, while the DHEAS concentrations were respectively 162.9±17.7 and 294.9±40.8 µg/dL. Cortisol values were slightly lower at Phase III 12.2±1.4 µg/dL in comparison to its Phase I values, while DHEAS values returned to normal at Phase III 168.0±22.1 µg/dL (Figure 2A,B).

In this study, we found major alterations in the secretion of HPT axis hormones in runners who participated in the 2016 “Spartathlon”. Circulating testosterone levels decreased significantly at the end of the run and only partially recovered 48 hours post run to about half the pre-run values. Thus, continuous, prolonged, brisk exercise, suppresses the end-hormone of the HPT axis with only partial recovery 48 hours postrace. Our results are in agreement with previous studies (24-26) which have suggested various mechanisms to explain this testosterone drop, including a decrease in the testicular blood flow (27), an increase in testosterone utilization to repair the damaged tissues (28), and/or suppressed hypothalamic and pituitary production of GnRH and LH and FSH respectively (29,30).

A significant decrease in LH and FSH levels also occurred at the end of competition with return to the pre-race levels 48 hours later suggesting that the resulting transient hypogonadism is most likely centrally mediated. Strenuous exercise inhibits the HPT axis at all levels, via activation of the HPA axis (2). Corticotrophin releasing hormone (CRH) suppresses gonadotropin-releasing hormone (GnRH) secretion from the GnRH neurons (31), either through direct effects or via the release of β-endorphin which is also secreted during exercise. On the other hand, glucocorticoids also exert inhibitory effects at the level of GnRH neuron, the pituitary gonadotroph, as well as the testes and render target tissues resistant to testosterone (32). Corticotropin-releasing hormone can also exert a negative impact on the LH effects in Leydig cells (33).

In our study, besides the HPT axis, the HPA axis was also affected by prolonged physical exercise, albeit inversely. More specifically, DHEAS and cortisol levels significantly increased at the end of the run, with DHEAS levels returning to normal, 48 hours post run, while cortisol levels although returned to normal at that time, remained slightly decreased. Elevated cortisol concentrations at the end of the race, consistent with activation of the stress system, were expected, as the body’s response to the stress of exercise and enhanced glucose needs (1,34). These results are in agreement with previous studies suggesting that endurance training is associated with subclinical hypercortisolism (13,24,25). Nevertheless, there are also studies that reported lower cortisol levels after endurance training, possibly reflecting post-stress adrenal suppression (35).

On the other hand, during stress, inflammation releases cytokines which suppress the reproductive function at multiple levels (36,37). These effects are mediated via activation of hypothalamic neurons that secrete CRH and POMC-derived peptides, as well as by peripherally secreted glucocorticoids (31,32). We have previously reported that in athletes participating in the Spartathlon race, interleukin 6 (IL-6), C-reactive protein (CRP), serum amyloid A (SAA) and free plasma DNA levels increased significantly at the end of the race (38). However, and although IL-6 levels returned to normal 48 hours later, CRP, SAA and free plasma DNA remained elevated. It is quite possible that continuous, prolonged physical exercise results in significant tissue damage, that leads to inflammation which in turn triggers the stress system that mobilizes all necessary machinery to restore homeostasis via a new dynamic equilibrium and development of physical fitness (39). These highly consuming energy steps take place at the expense of gonadal activity. The organism diverts all its homeostatic mechanisms towards the repair of damaged tissue and the fight of the inflammation shutting down testosterone production and spermatogenesis. This is mediated through activation of the HPA axis and elevation of its end product cortisol (40). After the stress stimulus is over, cortisol levels return to normal but testosterone levels remain suppressed. Clinical experience shows that after discontinuation of drugs, such as opioids and glucocorticoids, or any stress stimulus, that suppress the gonadal axis, testosterone levels and complete restoration of the HPT axis lags behind. Several studies have shown that testosterone levels differ between trained and sedentary men (41,42) and this difference (elevated or decreased testosterone levels) depends on the type of training. Previous studies have shown increased testosterone levels in sprint-trained athletes when compared with endurance-trained athletes (10,42), while endurance-trained athletes have lower testosterone levels than sedentary control subjects (11,41,42).

Although IGF-1 mediates most of the peripheral actions of GH (43), a major stress hormone, it was significantly decreased at the end of the race. These results are in agreement with previous studies which show decrease of IGF-1 levels after prolonged strenuous exercise (44). Both fasting and exercise decrease IGF-1 levels in blood, most likely signaling the negative energy status, but up-regulate GH signaling locally, resulting in increased IGF-1 synthesis in skeletal muscles (45-47). The latter mediates the repairing and hypertrophic effects of exercise (17,47). Although IGF-1 synthesis in the liver is regulated directly by the GH release from the anterior pituitary, IGF-1 production can also be activated locally induced by mechanical-stretch stimuli (18). Therefore, the decrease in IGF-1 in the circulation, seen in our study, at the end of the run is most likely consistent with an energy deficient catabolic stress state and follows a distinct regulation from the local IGF-1 production in muscles. Interestingly, testosterone and IGF-1 levels followed a parallel change, reflecting the negative energy balance of the ultra-distance foot race. Similarly, with the effect on testosterone, short duration exercise increases IGF-1 levels (21,22).

In summary, runners participating in the “Spartathlon” demonstrate a significantly altered hormonal status, as reflected by the activity of the HPT and HPA axes and IGF-1 levels. These hormonal responses differ from those elicited by sprint exercise. We therefore suggest that each exercise regimen may elicit a different hormonal response and exhibit a different recovery pattern that should be taken into consideration when assessing athletes for possible doping during and after a bout of strenuous short term or prolonged exercise.

Funding was received from Athens University Medical School. The funding source played no role in the study design; in the collection, analysis, and interpretation of data; in the writing of the report; or in the decision to submit the report for publication.

Ethical Statement: The study protocol was approved from the Bioethics Committee of the Harokopio University, Laboratory of Nutrition and Clinical Dietetics. All experimental procedures conformed to the National Health and Medical Research Council guidelines for experimentation with human subjects.