Vitamin D (vitD) is an essential nutrient long known for its role in bone health. VitD is often addressed as the “sunshine vitamin”, as it is mainly produced endogenously in the skin on exposure to solar ultraviolet B radiation and only a small proportion derives from dietary intake.

During the past two decades, we are witnessing a hype around vitD and a vitD deficiency pandemic is rapidly growing globally. There has been an increasing interest of researchers, with thousands of publications, in the possibility of enhanced roles for vitD in human health. Suggested links between vitD intake and health outcomes include cancer, cardiovascular disease and hypertension, diabetes and metabolic syndrome, falls, immune response, neuropsychological functioning, physical performance, preeclampsia, and reproductive outcomes. The media has also taken interest, and public awareness has been raised. Costly measurements of vitD are widely offered to apparently healthy people as part of a check-up, with no particular medical complaints or disease risks. Even patients ask their doctors to have their vitD levels checked. Moreover, millions of people are popping vitD supplements to ward off illness.

Do health outcomes of vitD supplementation justify the attention vitD has attracted? A thorough review issued by the US Institute of Medicine (IOM) suggests that information about the health benefits beyond bone health was from studies that provided often mixed and inconclusive results and could not be considered reliable. However, a strong body of evidence from rigorous testing substantiates the importance of vitD and calcium in promoting bone health (1). Another umbrella review of systematic reviews and meta-analyses of observational studies and randomised trials on vitD and multiple health outcomes concluded that, despite a few hundred systematic reviews and meta-analyses, highly convincing evidence of a clear role of vitD does not exist for any outcome (2). Moreover, in contrast to previous reports, the findings cast doubt on the effectiveness of vitD only supplementation for prevention of osteoporosis or falls (2).

The prevalence of vitD deficiency is reportedly increasing, and assay of serum 25-hydroxy vitD [25-(OH)D] is one of the most frequently ordered nutrition-related blood investigations. The percentage of the population with vitD insufficiency is high or extremely high in most European countries. Studies on the vitD status in Europe show that vitD deficiency is more common in southern than in northern Europe, a rather unexpected finding as ultraviolet irradiation is more effective in southern than in northern European countries (3). The vitD deficiency rates vary dependent on the cut-off points used to define the vitD deficiency. The higher the cut-off point value used to define normal, the higher the prevalence of vitD deficiency. Great controversy exists around the normal and adequate level of vitD. In 2010, the IOM issued a report suggesting a 20 ng/mL cut-off value (1), while the US Endocrine Society in 2011 recommended a 30 ng/mL cut-off value (4). Moreover, in 2016 several leading experts, members of the original IOM committee, published their perspective arguing for a much lower cut-off value, 12.5 ng/mL (5).

The aim of this observational study was to determine the total serum 25-(OH)D levels in postmenopausal women living in Athens, Greece, an urban area with high insolation and to determine the vitD deficiency rates in this population using the different cut-off points recommended.

We studied 271 postmenopausal women who had been consecutively referred by family physicians or specialists for 25-(OH)D level assessment to the microbiology lab of Peristeri’s Health Center, a public health center serving an urban area in Athens, Greece, during a period of three months (January–March 2017). The mean age (±1SD) was 67.3±7.9 years old. The current study was based on the use of the lab’s archived data on patients that have provided informed consent; the study ensured the patients' anonymity and was performed in accordance to the national legislation on the use of clinical data for research purposes. Using different cut-off points suggested by respected organizations (IOM, Endocrine Society) and experts, subjects were divided into four groups based on their Vit D status: 25-(OH)D <12.5, <20, <30, >30 (ng/mL). Prevalence of vitD deficiency was moreover evaluated by age group. Subjects were stratified by decade of age into four age groups: (<50, 51–60, 61–70, >70 years of age). The test of linear trend was performed using logistic regression analysis and a significant level set at P<0.05 (SPSS version 20.0, Armonk, NY, USA). In our study, serum 25-(OH)D was measured using the Elecsys® Vitamin D Assay, an electrochemiluminescence binding assay (ECLIA) for the in-vitro determination of total 25-(OH)D (Roche). 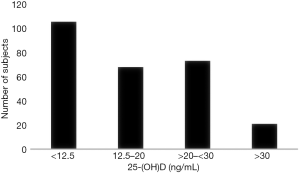 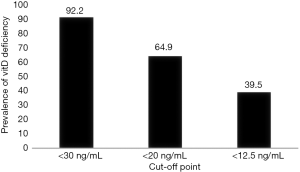 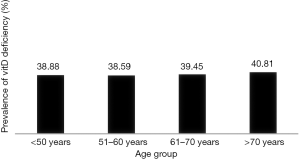 Our findings reveal a paradoxically high prevalence of severe hypovitaminosis D in postmenopausal women residing in one of the sunniest European cities, Athens. Our results are in line with previous studies carried out in South Europe and specifically Greece. The SENECA study carried out among elderly Europeans 70 years or older, showed that paradoxically hypovitaminosis D was much more common among people living in countries considered to be cherished by the sun, such as Italy, Spain and Greece, than among those living in countries in which sunshine exposure is commonly considered insufficient (Northern Europe) (3,6-8).

Although the major source of vitD is skin synthesis after exposure to sunlight, a variety of factors can impair cutaneous production of vitD in people residing in Athens, such as higher melanin content of the skin, avoidance of exposure to direct sunlight and use of sunscreens because of skin cancer concerns, limited outdoor activity in an urban environment and aging. Moreover, food sources rich in vitD (fatty fish, cod liver oil) are not routinely consumed in Greece and fortified products are absent (with the exception of infants’ and children’s milk).

The prevalence of vitD in postmenopausal women increased with advancing age, but this trend was not statistically significant. Aging can decrease by greater than twofold the capacity of the skin to produce vitD precursors (9). Moreover, elderly people usually stay indoors and undertake limited physical activity due to the presence of multiple co-morbidities, further contributing to reducing sun exposure. A plausible explanation for the failure of our study to establish a correlation of vitD prevalence with advancing age might include vitD supplementation, increasingly used by postmenopausal women, that was not addressed.

There is a universally observed seasonal variation of vitD levels, in accordance with the seasonal fluctuation in sun exposure. The lowest levels of vitD are noted from January till March- the period that we carried the study, with values significantly increasing from April to August and linearly decreasing thereafter. The vit D deficiency rate will have been lower if the study was carried out during summertime.

The overwhelming majority of postmenopausal women tested in our study suffer from vitD deficiency, especially if we use the higher cut-off values proposed by the US Endocrine Society (92.2% vs. 64.9%). Should we reconsider which are the right cut-off values? The utilisation of unjustified high cut-off values leads to higher estimations of the prevalence of vitD deficiency among the population. Several of the leading epidemiologists and endocrinologists, members of the original IOM committee, argue for a lowering of the currently accepted cut-off value of 20 ng/mL. They declare that the claim that large proportions of North American and other populations are deficient in vitD is based on misinterpretation and misapplication of the IOM reference values for nutrients—misunderstandings that can adversely affect patient care. They believe that we are over-screening for vitD deficiency, and unnecessarily treating individuals who are healthy. Based on their analysis of data from the National Health and Nutrition Examination Survey (NHANES) for the period 2007–2010, a more appropriate cut-off value for vitD deficiency would be 12.5 ng/mL (5).

Even if we adopt the lower cut-off value of 12.5 ng/mL, a significant proportion (39.5%) of the postmenopausal women residing in Athens will still be diagnosed with vitD deficiency during wintertime. Based on these results, it's clear that perimenopausal women should be screened for vitD deficiency and treated as appropriate for good bone health. Evidence from a recent study argues that serum 25-(OH)D levels are inversely associated with nontraumatic fracture in mid-life women and vitD supplementation in midlife women with 25-(OH)D levels <20 ng/mL is then recommended (10).

Although Athens is one of the sunniest cities in Europe, postmenopausal women in Athens suffer from hypovitaminosis D in a significant proportion. This could vary from 39.5% to 92.2%, depending on the cut-off values we utilise to define the vitD deficiency. These data justify screening perimenopausal women for vitD deficiency, as they indefinitely consist a high-risk group.

Informed Consent: The current study was based on the use of the lab’s archived data on patients that have provided informed consent; the study ensured the patients’ anonymity and was performed in accordance to the national legislation on the use of clinical data for research purposes.