Breathlessness in cancer patients has a broad differential diagnosis including the disease process itself, infection, pulmonary embolism or treatment-related effects. Identifying the correct aetiology is vital as treatment strategies differ significantly. Although clinicians are usually aware of disease progression and infection as possible precipitators of breathlessness, drug-related adverse effects are less thought of with antibody related systemic anticancer treatments.

A 57-year-old female with Grade 3 invasive ductal, human epidermal growth factor receptor 2 (HER2) positive left breast cancer (T2N0M0) presented with breathlessness on exertion and fevers. She is a non-smoker, has no pets and works as a career advisor. She was diagnosed with breast cancer in Turkey where she had a left wide local excision plus axillary node dissection. In the UK, she was treated with three cycles of fluorouracil, epirubicin and cyclophosphamide and one cycle of docetaxel chemotherapy, which was stopped early due to febrile neutropenia. She had left breast radiotherapy post chemotherapy (>6 months prior to her admission) and subsequently started on anastrozole. Before her admission, she had completed 11/18 intended cycles of monthly trastuzumab infusions. Examination demonstrated low oxygen saturations (92%) on room air and coarse inspiratory crackles were auscultated through the left lung field. 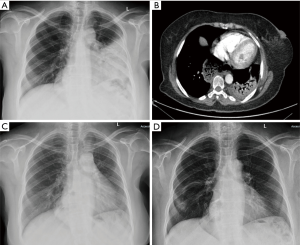 Computed tomography (CT) pulmonary angiogram (Figure 1) demonstrated left upper and left lower lobe consolidation with no evidence of pulmonary embolism. There was no evidence of endobronchial lesions or significant mediastinal/hilar lymphadenopathy. A large hiatus hernia was noted. Antibiotics were escalated to Meropenem and Teicoplanin to cover for aspiration pneumonia and metronidazole was added to the presence of a large hiatus hernia.

Inflammatory markers improved (WCC 8.57, neutrophils 6.31 and a C-reactive protein of 46.7) but she continued to have fever and breathlessness. She was persistently saturating at 89% on room air with persisting left-sided-crackles on auscultation. Bronchoalveolar lavage showed acute inflammatory cells and macrophages, and no pathogens were identified. Lung function tests showed a marked restrictive defect with a forced expiratory volume in 1 second (FEV1) of 1.18 L (58% predicted), forced vital capacity (FVC) of 1.34 L (55% predicted), transfer factor (TLCO) 3.06 of 43% predicted. A CT-guided lung biopsy demonstrated extensive alveolar plugging by granulation tissue including mixed inflammatory cells suggestive of organising pneumonia (Figure 2). Treatment with prednisolone 40 mg was commenced leading to clinical and radiological improvement with follow up chest X-ray showing resolution of the consolidation (Figure 1) after three weeks. The organising pneumonia was thought to be highly likely secondary to trastuzumab and this was stopped. 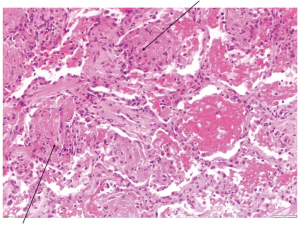 At her three months follow up the patient’s lung function improved with FEV1 increasing to 1.75 L (86% predicted), FVC to 2.06 L (85% predicted) and transfer factor of the lung for carbon monoxide (TLCO) at 4.46 (63% predicted). Less than 80% is abnormal. Two months later, since she was asymptomatic, she requested to complete her trastuzumab course. At her request, she restarted trastuzumab, knowing the potential risk that this may have triggered the organising pneumonia. Concurrently she was given a weaning dose of 20 mg of prednisolone daily. Just after her final cycle of trastuzumab she developed breathlessness and chest X-ray demonstrated new consolidative changes (Figure 1). The prednisolone dose was increased from 10 to 15 mg once a day and this, without further exposure to trastuzumab, was sufficient to resolve her symptoms and chest X-ray changes.

Breathlessness and fever are common symptoms amongst patients receiving cancer treatment. Radiological imaging usually demonstrates consolidation and the pneumonia is likely due to infection. However, failure of resolution of symptoms and X-ray changes despite antimicrobial therapy and the absence of positive cultures, should raise the possibility of other diagnoses. These include cancer progression, pulmonary embolism, drug-related adverse events, organising pneumonia, eosinophilic pneumonia and pulmonary vasculitis.

Organising pneumonia is an interstitial lung disease (ILD) characterised by granulation tissue within the airspaces and bronchiolar lumen that occurs as a non-specific inflammatory process and has several causes (1). These include idiopathic, following all types of pneumonia (including bacterial, viral and fungal pathogens), malignancy, radiotherapy, connective tissue disease and drug-related adverse events. In our patient, we were not able to identify a pathogen despite doing microbiological cultures on blood, sputum and bronchoalveolar lavage fluid. Connective tissue disease screen was negative. Furthermore, recurrent aspiration pneumonia and gastro-oesophageal reflux disease (GORD) are also reported to cause organising pneumonia (2,3). Our patient has a significant hiatus hernia, which increases the risk of aspiration pneumonia. However, she did not have symptoms of reflux or choking, and did not have preceding episodes of recurrent pneumonia, making this a less likely cause. Although radiation pneumonitis can lead to organising pneumonia, in our case we suspected drug-induced organising pneumonia and stopped the trastuzumab whilst treating with corticosteroids. Radiation-induced organising pneumonia usually occurs within 3 months of the radiotherapy, and very rarely after 6 months, making it less probable that this was the cause of the organising pneumonia in our patient. The patient was also on anastrozole, a drug not known to cause organizing pneumonia, hence she remained on it throughout the course of the treatment.

It is important to note that the incidence of ILD with trastuzumab monotherapy has not been proven due to the concomitant administration with chemotherapy. In a large trial of 3,105 patients receiving trastuzumab monotherapy there were no reports of ILD (5). Sugaya et al. (6) cite seven known cases of organizing pneumonia in patients on trastuzumab. All except one patient had received previous chemotherapy, and all cases made a full recovery with steroid administration.

In our patient, we concluded that most likely cause of organising pneumonia was trastuzumab. Our patient improved after stopping trastuzumab and starting prednisolone, and later developed new consolidative changes after recommencing trastuzumab to complete her 18th cycle whilst on a weaning dose of prednisolone, which we believe to be a recurrence of organizing pneumonia, as no evidence of infection was found and she again improved with escalation of the steroid dose only.

Ethical Statement: The authors are accountable for all aspects of the work in ensuring that questions related to the accuracy or integrity of any part of the work are appropriately investigated and resolved. Written informed consent was obtained from the patient for publication of this manuscript and any accompanying images.